In recent years, beer drinking has enjoyed a renaissance, with the arrival of the craft beer boom, more and more people have begun to understand what it really means to taste and enjoy beer. Rather than knock back a pint of something tasteless as quickly as possible and move onto the next pub, even young men in their early twenties are turning their noses up at mass produced beers and savouring the flavours of what some of us have been enjoying for years.

Because of the increase in microbreweries and a broader selection of craft beers and real ales being made available, to a much wider audience, more and more people are starting to look to home brewing to re-create that wonderfully hoppy triple IPA, or that bitter sweet chocolate stout they’ve had at a local beer festival, or trendy bar.

This article is here to help you appreciate the beer you've just made, learn about it and improve on it...in short, enjoying the craft of homemade beer.

Beer tasting is similar to wine tasting, but you don't spit it out. The hoppy bitterness is tasted at the back of the tongue so can only be sampled properly by swallowing. If you are tasting a few different beers, then a clean glass of water should be kept at hand to cleanse the palate after each beer. You should also keep a note book and pen to record your experiences. You'll find it impossible to keep a detailed record of your beers in your head, so writing it down allows you revisit and compare different beers, even the same beer at different times. You also need to ensure you have a large CLEAN glass to drink from. By that we mean, ensure after washing, it is thoroughly rinsed to remove all traces of washing up liquid and the attendant slight 'soapy' taste.

Firstly you need to ensure the beer you're tasting is the right temperature; Some beers, particularly light and wheat beers and largers are meant to be drunk cold, say between between 5°C and 10°C (41°F to 50°F). Most beers need a degree of warmth to fully release the flavours and aromas. Beer which is too warm could release unintended off flavours so aim for a serving temperature of between 10°C to 15°C, 50°F to 59°F.

Home brewed beer gets much of its character from the conditioning the beer gets in the bottle, from its secondary fermentation. This inevitably creates a film of sediment at the bottom of the bottle and care must be taken not to disturb this. The sediment will do you no harm, but it does cloud the beer making colour comparisons difficult and will strengthen any tendancy to 'yeastiness'. Holding the bottle firmly down on a level wipe clean surface, remove the cap, noting the 'hiss' of escaping gas. This is the first sign the beer is live and no leakage has occurred which could have spoiled the beer. Lift the bottle and glass carefully up to eye level and view them both against a light background such as a window. Hold the bottle and glass horizontally resting the bottle neck on the rim of the glass and tilt ever so slightly so that the beer runs gently from the bottle, down the side of the glass. This will keep the carbon dioxide in the beer to maintain the sparkle and aroma (which is carried primarily in the gas). As the beer runs into the glass, slowly tilt the glass upright until its about 2/3rds full when you can move the glass away from the bottle to allow it to pour into the center of the glass from a a little height so as to form the head.

You need to be keeping an eye, at the same time on the beer itself to see where the sediment is moving towards the neck. As the glass fills, the bottle empties and the sediment gets closer....so try to stop pouring before the cloudiness enters the glass. Gentle movements are the secret to success on this but don't expect to get the full bottle into your glass as some wastage is inevitable.

If you will be re-using your bottle go and rinse it out straight away to stop the sediment drying out and hardening in the bottle.

So before you dive in and down the glass full, just take time to look carefully at the brew.

You're looking at clarity and colour and these are mainly the result of the beer style. The beer should be clear, but some wheat beer and often lagers could be cloudy. There may be a 'Chill haze' caused by the beer being too cold, but this should disappear as the beer warms. The colour is best viewed against a white background and can be described in terms of light to dark with slight hues of other colours. Darker beers are generally stronger flavoured with more body although some brewers use dark malts in light-tasting beers, just to ring the changes. 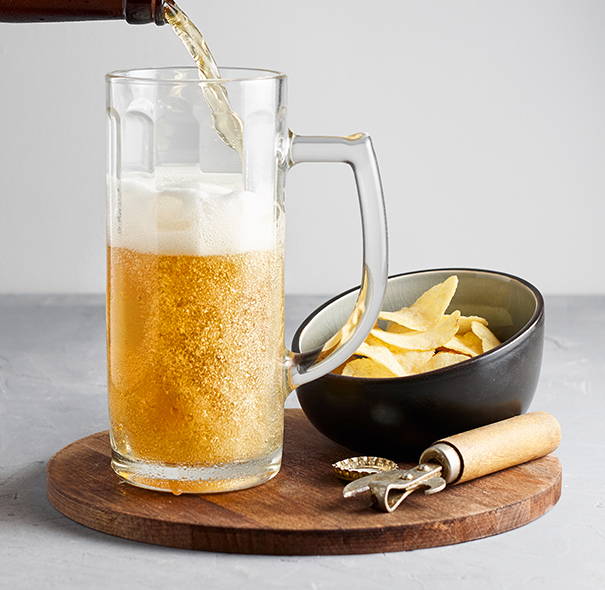 You can often see the head has a slight colour of its own. The head, and not all beers have a head so its not necessarily a sign of a poor brew, should be creamy, not bubbly. The head is important for releasing the beers aroma as the gas brings the scents to the top in the form of bubbles which get released as the bubbles burst. A fizzy, 'sizzling' head which flattens quickly suggests a brew with less malt and more sugar. This can produce excessive carbon dioxide leading to a more acidic tasting beer.

As there is a drop of beer left in the bottle, you should have a space in the glass for the aroma to collect. Cover the glass with your hand and swirl it around to get the scents and smells out of the beer. Now stick you nose right into the glass and with your mouth closed, take a deep breath through your nose. Hold that aroma in your nose/throat/mouth for a while and look for specific scents... hops in bitters and pale ales, chocolatey flavours in stout and citrussy hints in lagers. You should do this a few times looking for a different theme with each breath.

Its no good doing what the wine tasters do and sucking the beer with a good deal of air into your mouth. This will just fill you up with froth, so take a small mouthful first and swirl it around your mouth to get the beer on every part of your tongue. You should get the sweet of the malts at the front of your mouth, while dry and bitter flavours come through at the back of your mouth. Look for the balance between these two...is it a bitter or a sweeter beer? Can you detect any other flavours such as fruits, or burnt' as you swallow the beer and get the finish. The finish is that after taste which can be quite different from the front taste. Try this a couple of times looking for different flavours with each mouthful and look for the 'mouth feel'...that almost indefinable feeling the brew has whilst in your mouth. Beers with a high malt content will feel 'thicker' which is the body.

Don't forget to note your thoughts down in your notebook, then take a couple for mouthfuls of water, running it round your mouth so you're ready for the next beer.

You don't need to be too artistic about this as there is plenty of drivel written about beers. You are looking for those things you like in your beer and finding out how to recognise them in other beers. So call it as you see it and ignore so called experts. Once you have your hand in (and the good news is, it can take some time and many pleasurable tastings to get there) you'll find it easier to evaluate a beer and so be able to create those brews which suit you best.